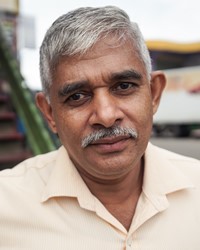 The Sri Lankan Sinhalese speak Sinhalese, which is known as Sinhala, as their native language and constitute about 75% of the Sri Lankan population.

Known countries with Sinhalese diaspora in Europe include Italy and the United Kingdom. The majority fled as refugees in the 1980s, escaping the violent civil conflict in Sri Lanka.

Italy was attractive to the Sinhalese due to perceived easier employment opportunities and entry, compared to other European countries. The major Sinhalese communities in Italy are located in Lombardia (In the districts Loreto and Lazzaretto), Milan, Lazio, Rome, Naples, and Southern Italy (Particularly Palermo, Messina and Catania).

Over 50% of the Sinhalese population in the United Kingdom reside in Greater London.

The majority are Theravada Buddhist with a minority being Roman Catholic. One may easily confise their Buddhist practices with those of Hinduism. Some of these practices may relate to ancient indigenous beliefs and traditions on spirits, worship of deities and godlings and some figures that appear as demons. Some of these demonic figures are used in healing rituals. Such practices are often indigenous to their island homeland, Sri Lanka.