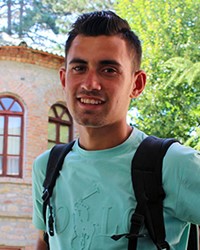 The Albanian Gheg are one of two Albanian diaspora people, the Gheg of Kosovo and the Tosk of Albania, of Europe. The Tosk language is one of two main dialects, the other being Gheg, also spoken in Albania. Although mutually intelligible with one another, social-cultural norms derived from a long history of how the Gheg and Tosk view one another reinforce the Gheg's and Tosk's own distinct social identity.

The Gheg are often known to be stern and courageous and the Tosk being more friendly and talkative. Albanians populations due to emigration between the 19th and 21th centuries are located in Germany, Belgium, United Kingdom, France, Sweden, Switzerland, Slovenia, Croatia, Italy, Finland, Denmark, Norway, Austria, Netherlands, Bulgaria, Greece and Romania.

Most Albanians are nominal Muslims, following only Islam because of their past family and ethnic heritage. Some have begun to marry outside their people group.